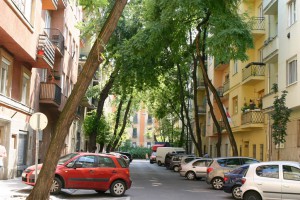 This house was built in 1930’s in the 9th district, Ferencváros, named after Kaiser Franz Josef. The building was hit by a bomb during WW2 and was rebuilt after the war. The building and its neighbourhood reflect the typical modernist style of the 30’s, with 4-5 storey colourful houses and rounded balconies, an example of the new, functional building style omitting the opulent decoration and replacing traditional room-to-room layout by small, well separated and functional apartments. Maybe that is why these buildings attract so many residents of Budapest.

Development and industrialisation of the district started in the second half of the 19th century. During this period, Ferencváros’ five mills, slaughterhouse (the largest in Hungary) and the Central Market Hall were constructed. Therefore this area is often referred to as “Mill district” and was home to many middle-class people in the past. Thanks to the recent rehabilitation of the area, buildings have been restored, hopeless ruins replaced by new houses, and so this old district came back to life and became very popular among young families. With this came schools, hospitals and restaurants, shops and cafés all over the area.

This area is not the one known by tourists but the one lived by its inhabitants, still it offers enough attractions that should satisfy the keenest visitor without revisiting the well-known sites. Those wanting to see past the usual touristic facade of the city couldn’t find a better area for this adventure.

The new National Theatre, Palace of Arts with the Ludwig Museum, Opus Jazz Club, Trafó and the Bálna (Whale) are all cultural centerpoints of Budapest. Many tech companies and banks have their headquarters and office buildings here, as well as university campuses (Technical University, Semmelweis University of Medicine, and also the Corvinus University for Economy). Many museums presenting the history of the local industry, of mills and spirit factories, among others of the famous Zwack family, are located here. The Holocaust Memorial Centre and the Museum of Applied Arts are in walking distance. Beyond the well-known thermal baths there is a little, freshly renovated one (Dandár Spa), known and used only by local people.

The ring road (Körút) with tram Nr 4 and 6, one of the most important public transport line, is just a corner away. This line is so important that while metro lines don’t operate during night, this line does, and takes visitors from Danube to Danube, from Andrássy út to the Parliament building. Tram Nr. 2, just some steps from our door, is probably the most attractive line, taking travellers from the Palace of Arts to the Parliament and the Margaret Island. It runs along the Danube side offering the best views a single ticket can buy. Metro is in 10 minutes walk, or one tram stop away.

This part of the city is biker friendly, tourists can use bikes instead of public transportation. A good alternative to commercial bike rentals is a public bike sharing system (BUBI = BUdapestBIke) which operates as part of the public transport network. With daily subscription you can pick up a bike, ride somewhere and leave it at any of the many docking points across the city.

Pictures from the closest neighbourhood: